By BARBARA RYBOLT
February 5, 2020 at 10:30 PM
Share to Facebook1Share to TwitterShare to EmailShare to PrintShare to More4 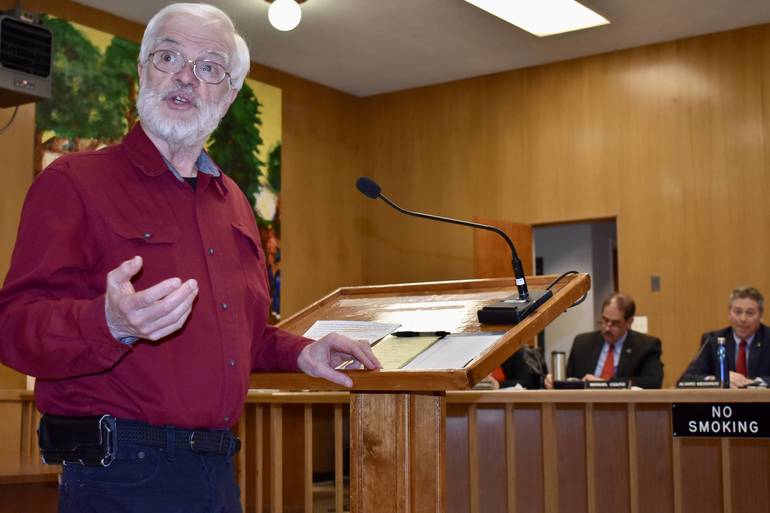 The 5-1 vote came after a public hearing which lasted more than an hour. During the hearing, opponents and proponents of the ordinance spoke to the council.

Among the supporters were members of two Girl Scout Troops.

Sign Up for Berkeley Heights Newsletter
Our newsletter delivers the local news that you can trust.

Three members of eighth grade Girl Scouts from troop 40178 are working on their Silver Award by up-cycling used T-shirts into reusable grocery bags. At the same time they are educating the public about how harmful plastics are to the environment and providing them an alternative to a single-use bag.The Scouts are currently collecting used T-shirts at the Berkeley Heights Library.

Girl Scouts from Troop 40254 are educating the public on the problem of single-use plastic straws, which are too light to be recycled by machines and end up in the oceans. They hope to educate the public on the options, including biodegradable straws, metal straws or bamboo straws, and are selling metal, reusable straws.

Later in the proceedings, one of the Girl Scouts returned to the microphone and gave an impassioned plea in response to someone who said they didn’t know what was going to happen when these plastics were banned.

Well, guess what, I am 14 years old, and I am going to be living in this burning hell for the rest of my life. So, I think some people ought to get their priorities straight about what they really want. I am going to have to tell my kids and my grandkids what their grandparents did when all this was happening … and I’m going to have to say well, …. I don’t really know what they did. Some of them did really great things, while the rest of them just sat around on their lazy butts and waited for other people to do it.”

Opponents of the ordinance included a number of residents.

Tom Maciejewski asked if there were any businesses in town who have already done anything to ban plastics.

Maciejewski said while he is “pro-environment” he is concerned that the behavioral change will be going to the next town, where people can get a bag. “We should be able to do what we want and what we can. I don’t think we need to be forced into this.” He said he supported the Girl Scouts, but thought “we could make an environmental change without being forced to make the environmental change.”

Dr. Tom Foregger said “it is not at all clear that what you are doing here is actually going to accomplish what you want to accomplish.” He asked what the council was trying to achieve with the ordinance and how would members know if the goal was achieved. He described a number of goals that he found in the ordinance ending with one “from the last hearing … I heard you want to save the planet, that’s admirable for a group of volunteers.”

He referenced economist Rebecca Taylor of University of Sydney, who published, several papers on plastics, and reported that people replace the single-use plastic bags that they used to use for their garbage with purchased, larger trash bags.

Foregger also referenced similar studies on whether cotton bags are more environmentally friendly than plastic bags – they aren’t, according to studies he referenced.

Margaret Illis said she favored the ban, and had noticed Dunkin’ Donuts was not using the polystyrene cups and, at Walgreen’s, employees are not automatically putting things in a plastic bag – shoppers have to ask for one. “Businesses are starting to take this step.”

Richard Matula was adamant about his opposition to the ban on plastics and it all boiled down to whether the residents are “for individual rights or for government to control our rights?”

His main concern, however, was whether the plastics ban would weaken the “defense against bacteria and viruses,” especially the new coronavirus.

Stephen Carrellas said he does not use plastic bags, but this ordinance has the unintended consequence of increasing his outgoing plastic waste. He was upset about the relatively short time between the Environmental Commission’s Dec 3 presentation to the public hearing on the ordinance — about two months, with holidays during December.

Conservation Chair of the Sierra Club for Union County, Livingston and Millburn Allen Swanson praised the council for having produced an outstanding ordinance, especially in the “whereas background information … I have not seen a better presentation of the background information and justification on any ordinance in the state. He said he was going to take it to the state board meeting of the Sierra Club on Saturday, “as an example of what we should be advocating for in the future and using in the future.” He also commended the younger people who were at the meeting. The same thing happened in Millburn — there were about 45 speakers, he said, 42 of whom were young. “The reason for that is they were looking toward their future,” he said.

John Leo said he took a skeptical look at the ordinance and suggested people are not seeing the big picture. “I support the reduction in the plastic use because … nine out of nine sites tested have microplastics in them.” Every time they study plastics, wherever they study them, they find microplastics. “Plastic does not go anywhere,” he said.

Two changes were made in the ordinance before it was finally adopted. The first eliminates the word “highly” contained in the definition of a “Recyclable Paper Carryout Bag,” that a recyclable paper carryout bag has to have the words “recyclable” and/or “reusable” in a “highly” visible manner” on the outside of the bag. It will now be sufficient that there is the recyclable logo on the bag.

The second one came as a result of comments from Don Parkin, owner/operator of Goodman’s Restaurant & Deli, who told the council during the hearing that he supported the ordinance but was finding it difficult to obtain substitute bags, straws and carryout containers at a reasonable price and in appropriate quantities, since small businesses have limited storage space. He asked if the council could delay the implementation of the ordinance until these issues had been worked out.

Councilman Manuel Couto supported Parkin’s request. He said once other towns in the area begin to enforce their ordinances, the wholesalers will begin to realize there is a need for recyclable products for retailers, and begin to supply them.

Couto said he had one more request, for the Environmental Commission to report back to the council with data up to Dec. 1, 2021, the end of the first year the ordinance is in effect. That way they can see the impact the ordinance has had on the environment, businesses and residents. It was agreed that this was a good idea and there will be an amendment to the ordinance specifying that the data should be compiled and presented in January 2022.

Councilwoman Gentiana Brahimaj, who voted “No,” said this ordinance was “introduced to the public without any public input, and it needs to stop. I think we need to have more research and more data behind it. I see this as government overreach and considering that I come from a socialist country I know very well what that means.”

Couto said he agreed with Brahimaj that more discussion is needed but, “as someone who has walked the streets and picked up the garbage and walked the walk and talked the talk, I think the bags have to go, so I’m voting yes.”

Councilwoman Jeanne Kingsley said she has done her homework on the topic and has gone “door-to-door with the Environmental Commission and talked to almost every single business and restaurant in town to discuss the impact on them. We didn’t have one business that was against it.” She said the ban was passed more than a year ago in Stafford Township, Long Beach Island, “and it has been highly successful.” She voted “Yes.”

Council President Alvaro Medeiros said the ordinance was introduced on Dec. 3, it was presented to the Berkeley Heights Business and Civic Organization a few days later, then they walked the town to talk to other businesses. “I don’t think it was actually rushed,” he said. He voted “Yes.”

Council Vice President Susan Poage responded to negative comments about the goal of the program being “changing people’s behavior.” That reminded her of other instances when people were asked to change their behavior — “dumping in the ocean, recycling, to begin with …  labels on cigarettes, sweatshops” and more. She voted “Yes.”