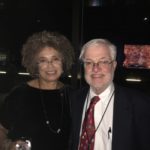 Angela Davis on Remaining in the Struggle

In recent years Leslie and I have been fortunate to participate in activities related to the independent news organization Democracy Now (Truth Matters NP Issue 1).  One event I attended with DN was a small reception at the National Museum of African American History and Culture, the day before Trump’s inauguration.  During that meeting I met, among others, Angela Davis.  A brief discussion of little significance and a picture took place

Davis was in Washington for the same reason I was, the Women’s March the day after the inauguration.

I mention this because on June 24,” an interview of Angela Davis was published in the Guardian.

I need not go through Davis’ history with my contemporaries and for those younger you can easily find her history.  In a time when Ibram X. Kendi’s book How To Be An Anti-Racist is a best seller, it is noteworthy that it is Angela Davis who is credited with the phrase, “In a racist society it is not enough to be non-racist, we must be anti-racist.”  Angela Davis has historically been an extremely controversial figure.  It is that past that makes he comments about how she sees current events interesting.

Angela Davis has been, based on her experiences, rather pessimistic about the prospects of real change.  She feels that the leadership of both parties “not the Democrats and certainly not the Republican party,” are prepared to be open to the progressive ideas required for social change.

The reason I bring up Davis’ interview is that her view of what is happening across the nation represents a change.  She expresses that “This time, white people are beginning to understand.”   She continues, “We’ve never witnessed sustained demonstrations of this size that are so diverse, so I think that is what is giving people a great deal of hope.  Many people previously, in response to the slogan Black Lives Matters, asked: “But shouldn’t we really be saying all live matter?’  They’re now finally getting it.  That as long as black people continue to be treated in this way, as long as the violence of racism remains what it is, then no one is safe.”

Davis also explained a feeling I have often experienced recently myself.  As I participate in organizing meetings, marches, and networking, I am always impressed by the young people I encounter.  Davis sums this feeling up with the following;

“I see these young people who are so intelligent, who have learned from the past and who have developed new ideas,” she says. “I find myself learning a great deal from people who are 50 years younger than me. And to me, that’s exciting. That keeps me wanting to remain in the struggle.”

In a separate interview for NPR, Davis further emphasized her perception of the current movement being different when she said: “I am just so happy that I have lived long enough to witness this moment,” she says.  “And I think that I see myself as witnessing this moment for all of those who lost their lives in the struggle over the decades.”

Those of us who are contemporaries of Angela Davis need to provide the experience and guidance to support the youth who are this nation’s and planet’s hope for the future.  I know for me, as with Davis, the current events definitely “keeps me wanting to remain in the struggle.”

It is the young people who represent the change we need.  Their commitment, energy and optimism give me hope that just maybe this time the real change we need may get a foothold.